Our March day course proved to be a very snowy day.  Our tutor was unable to travel to Wollaton and many of the participants were similarly unable to join us for a day of dances called A Mixed Bag.  The day was therefore cancelled.  However, a few of us went to the hall to be there for any brave travellers and yes we did have a couple of such.  We therefore had an impromptu hour or so before locking the hall for the day.

Our tutor Geoff Weston kindly agreed to come to a couple of our Thursday club nights in the Summer term to teach us some of the dances he had prepared.  We learnt dances from a mix of countries such as Switzerland, Majorca, France and Russia.

The Summer term has been a particularly busy term.  Corry Verheijen from Holland dropped in one May club night and we had Janet Woolbar (SIFD teacher) and Ben Hooke (musician) lead us in a Portuguese afternoon of dance in June.  July Saturdays have been demonstrations at local events notably Celebrations of Culture in Beeston Roundhill School and West Hallam Well Dressing.

Nutbrook hosted the SIFD AGM on Saturday September 22nd 2012, another glorious Autumn day, a bit chilly but blue skies and sunny.  The event was held at Grangewood Methodist Church.  Building work to improve facilities were just about finished, the boarding having come down the previous day.  The session began with Armenian dances taught by Dalila Heath.  These included Aich Naro Naro, Ambee dageets, Aiee yar Yar (Tamzara couple dance) and a Story dance - Ilikneeou - Spindle dance.  The workshop was well attended and the participants enjoyed the clear teaching and revision of dances during the afternoon which helped the memory process.

The SIFD Annual General Meeting followed this session and finished at 6.00 pm in time for the Ploughmans meal and desserts which were much appreciated after the brain work of the afternoon.  The evening dance began promptly at 7.00 pm with excellent music from the Heart of England Band.  A great variety of dances was led by Jill Bransby the MC for the evening who had skilfully chosen a wonderful mix of partner, no partner, set and circle dances from Russia to Mexico and from England to Greece.

In summary - a most enjoyable afternoon and evening. 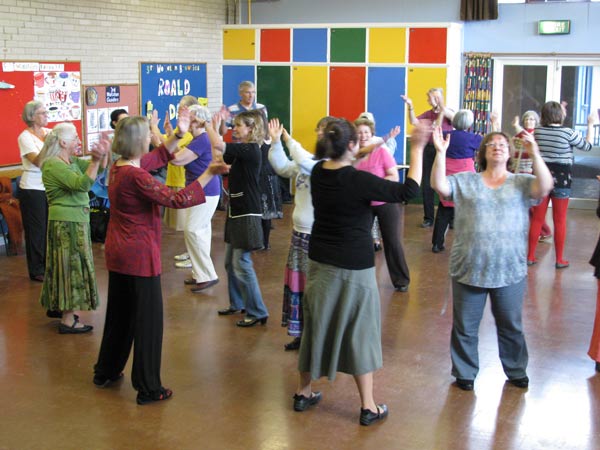 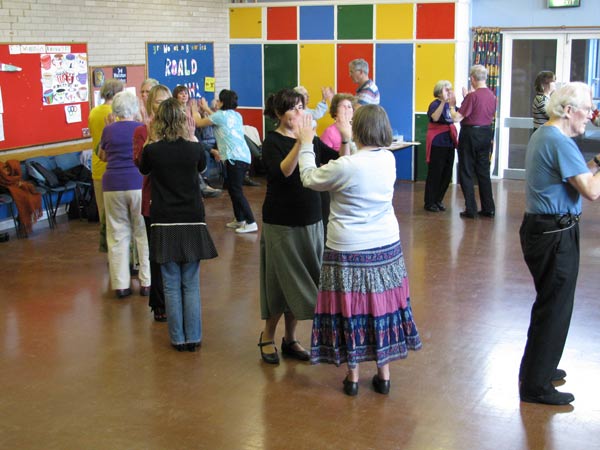 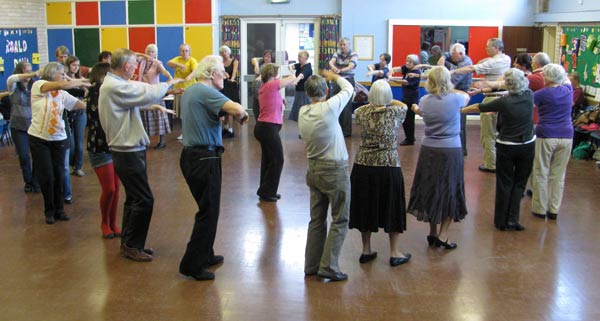 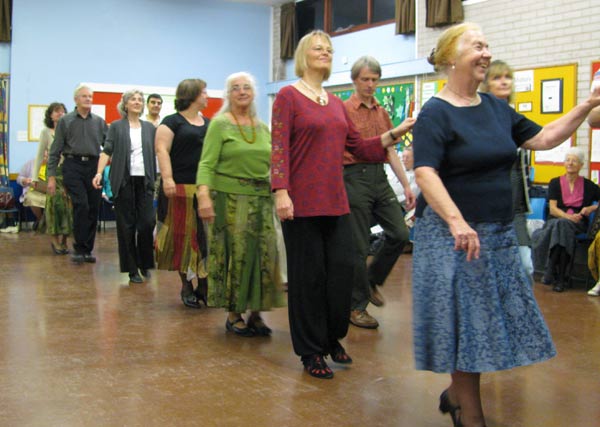 October 1st was the hottest day on record for this date.  Frank Dowling changed his programme to accommodate this fact and we all enjoyed a variety of dances to suit the weather.  The selection included Albanian, Greek, Macedonia, Turkey, and dances that border Romania, Moldova and Hungary.  The teaching was excellent and we all succeeded in mastering 10 dances from the Balkans including Valle Jarnana, Levantinikos, Mori Shej, Konyali and Rezianka.  The music was varied from the lyrical Greek music and the dance imitating the waves of the sea, to the more strident music of the Macedonian bagpipes.  A very enjoyable day.

To end the Spring term 2011 members wore hats to celebrate Easter, a slant on the traditional Easter bonnets.  There was also a display of hats and pictures of hats from other countries.  The idea was to dance a dance from each country that a hat was worn.  We included Vals fra Vinon from Sweden, Mellem Kaeg og Veg from Denmark, Erva Cidera from Portugal Ali Pasa from Turkey and Shatagi Shoror from Armenia.

The most spectacular hat was one from Uzbekistan, a gorgeous golden cap.  There was a straw summer hat from Romania, hats with brims from USA (cowboy) and Mexico, embroidered hats to describe just a few.  It was a very enjoyable night. 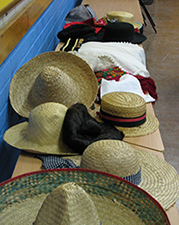 © 2005 - 2021 Nutbrook International Folk Dance Group
This website does not use cookies, and does not collect/use/store any information about you or your identity